Her Royal Highness Princess Maha Chakri Sirindhorn of the Kingdom of Thailand paid a visit to Tokyo Metropolitan University (TMU) on April 24, and was awarded the honorary degree of doctor, in recognition of her outstanding accomplishments in science and education.

Her delegation including his Excellency Ambassador, Mr. Sihasak Phyangketkeow, of the Kingdom of Thailand to Japan, and executive members of TMU together with Thai students studying at TMU attended the conferring ceremony. 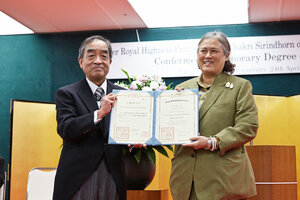 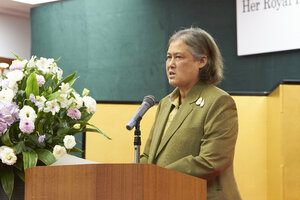 In her commemorative speech, Her Royal Highness referred to a long-standing relationship between Thailand and Japan. She was very pleased that Tokyo Metropolitan University has close connections with several universities in Thailand. Her Royal Highness remarked that academic relation plays an important part in building peaceful coexistence among human beings and environments. She hoped more academic cooperation in years to come. 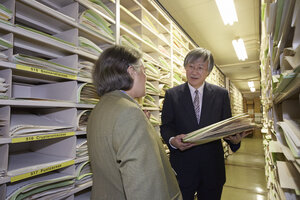 After the conferring ceremony, Her Royal Highness and her delegation visited the Makino Herbarium in the campus. Her Royal Highness showed her special interest in specimens of extinct plant species, such as Eriocaulon cauliferum Makino, whose DNAs still survive only in the specimens collected by Dr. Makino more than 100 years ago. She raised professional questions to Prof. Noriaki Murakami about the preservation, digital image database of specimens, etc.

We both hope to strengthen the relationship between Tokyo Metropolitan University and the Kingdom of Thailand.