Professor Masatake Haruta has been presented with a certificate as a 2012 Thomson Reuters Citation Laureate in the annual pre-Nobel “Thomson Reuters Predicts Nobel Laureates” event. 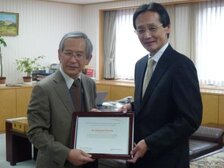 scene of the ceremony

Professor Masatake Haruta, Department of Applied Chemistry, Graduate School of Urban Environmental Sciences, who was selected in September of this year as a Thomson Reuters “Nobel-class” Citation Laureate, received the certificate at a ceremony on Friday, November 30 at the Minami-osawa Campus.

Attendees at the ceremony included Mr. Nagao, Managing Director of Thomson Reuters Japan, and from Tokyo Metropolitan University, Professor Haruta himself along with President Harashima, Vice President Okumura, and Dean Sugiura. The certificate was presented, and an explanation of the reasons for Professor Haruta’s selection provided.
Professor Haruta was named as a potential Nobel laureate for his “independent foundational discoveries of catalysis by gold.” It was explained that Professor Haruta’s published papers are among the world’s most widely cited, and the number of citations has been rising steadily in recent years with a particularly dramatic rise in 2011.
It was also noted that his research has been cited throughout the world, in Asia, Europe, North America and the Middle East, and has had a profound influence on the development of the relevant field.
Information was also provided on the number of papers published by researchers at TMU, classified by field, and on the major impact papers released by the university have had on international research, particularly in the field of chemistry. After the explanation there was a lively question and answer session, which served as a valuable exchange of information on how TMU is viewed from a global perspective.

In a speech, Professor Haruta stated that he hoped to continue research in challenging new areas at TMU, and hoped his earning the title of Citation Laureate would serve as a stimulus for further enrichment of the research environment.

The Thomson Reuters prediction of Nobel laureates and conferral of awards became a regular annual event in 2002, with 27 of the 180 potential laureates named through 2012 having gone on to win actual Nobel Prizes. Hopes are high for Professor Haruta to earn the Nobel Prize in the future. 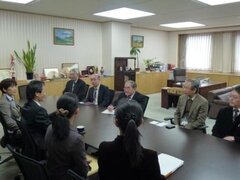