TOP
Research
List of Research Projects
Three laboratories collaborate to develop robots for use in medical care, welfare, and disastershttps://www.tmu.ac.jp/english/research/lrp/case006.html 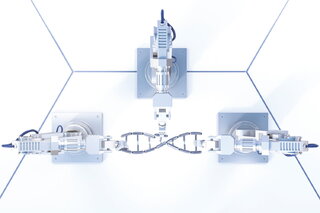 Three laboratories collaborate to develop robots for use in medical care, welfare, and disasters

Professor Naoyuki Kubota uses cognitive science and brain science as the background of his robotics research, the study of robots that can become partners with humans. Associate Professor Naoyuki Takesue specializes in mechanical engineering research in fields such as robot mechanisms and motion control. Associate Professor Kazuyoshi Wada is working on the theme of cooperation between humans and robots, conducting research on the impact of robots on human mental health and developing interfaces.

In his research on motion systems, Professor Kubota is pursuing the study of multilegged walking. Associate Professor Takesue’s research focuses on underwater and aquatic movement and flight by wing-flapping movements. In the service robotics category of the World Robot Summit, which Associate Professor Wada is involved in planning and organizing, the Takesue and Wada laboratories are jointly planning a toilet-cleaning robot competition.

Understand each other’s skills and cooperate according to objectives

The three robotics laboratories in the Mechanical Systems Engineering Department of the Graduate School of Systems Design are usually independent in their research, but they also collaborate flexibly according to the purpose of the research and technology required, including the development of support robots for the medical and welfare fields, where they share common themes. In the “Tough Robotics Challenge,” a four-year project sponsored in 2014 by the Cabinet Office as part of the Impulsing Paradigm Change through Disruptive Technologies Program (ImPACT), the three laboratories collaborated with other universities and research institutes to develop robotics systems for use during disasters.

In this project, they developed a sensor system that enables four-legged robots developed by other universities to move around in the chaos of a disaster site. The Kubota Laboratory was in charge of processing the signals measured by multiple laser distance sensors, the Takesue Laboratory handled the motion generation to move the sensors with motors, and the Wada Laboratory did the interface for remote control by humans. This sensor system provides three-dimensional information about the robot’s surroundings, allowing it to determine if its path is flat or if its footing is insecure. It will also be able to traverse differences in land height to reach the disaster site, open doors, climb ladders, and close valves on broken pipes.

While each laboratory is independent from one another, smooth collaboration cannot be expected if the laboratories only meet when conducting joint research. In addition to holding seminars together, the three laboratories hold an annual joint year-end party attended by a total of 100 people, including alumni and representatives of companies with which they have collaborated. Many ideas and projects are born from such frequent interactions.

Professor
KUBOTA Naoyuki
Completed doctoral program at the Graduate School of Engineering, Nagoya University. In current role since 2012, after working at Osaka Institute of Technology and University of Fukui.

Associate Professor
TAKESUE Naoyuki
Completed doctoral program at the Graduate School of Engineering, Osaka University. In current role since 2008, after working at Nagoya Institute of Technology and other institutions.

Associate Professor
WADA Kazuyoshi
In current role since 2007. Outside of the university, has served as a member of the Executive Committee for the International Robot Competition and other organizations since 2016.